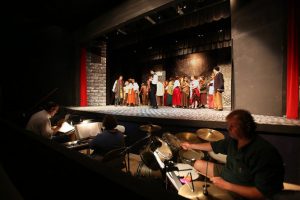 The Chickasaw Civic Theatre was formed in 1963.  That first season of 1963-64 saw the group perform Our Town, Charlie’s Aunt, The Mousetrap and Sabrina Fair.

The location of the theater has changed several times, prompting the founding members to name it “the tepee” since they had a movable home. The first theater was in the Gulf Homes auditorium. When that was torn down, a move was made to the old bottling plant on Highway 43.  When that was no longer available the theater relocated to a former scout hut, known as the Healy-Van Leer Building, which was located in the hollow between Paul Devine Park and Chickasaw Elementary School. After the building was flooded a few times, the City of Chickasaw, under the leadership of then Mayor J. C. Davis, moved it to a location on Lange Drive, adjacent to City Hall.  This took place in 1973, and was home to the theater until January 2005.

In 1996 the theater was named The Lola Phillips Playhouse, after Lola Phillips, who had been with the theater for most of its first 32 years.  Lola retired as resident director in June of 1996.  She once described the playhouse as “the last of the intimate theaters.”

The first musical was The Boyfriend, produced in 1973.  Since then, CCT has produced such Broadway hits as Camelot, South Pacific, The Sound of Music, The Secret Garden, Damn Yankees, Man of La Mancha, My Fair Lady, Titanic and Joseph and the Amazing Technicolor Dreamcoat.

In 2000, CCT attained charitable, non-profit status, making it eligible for tax-deductible donations.  A capital building campaign is continuing.  We have raised over $200,000, allowing us to begin producing plays in the new facility.  Additional funds are needed to complete the remodeling and fully utilize the building.

The Chickasaw Civic Theatre Board of Directors